An LGBTQ youth group says the school year wasn’t the success the Delta County School District made it out to be.

At the school district board’s June 22 meeting, the group presented a slew of allegations, ranging from slurs, to finding mutilated animals on LGBTQ students’ lawns.

“During my time at school, I’ve seen a lot of hate and it’s been incredibly hard to witness,” Abby LaBounty told school board members on June 22.

LaBounty was a school district student advisory council member for two years before graduating in May. The graduate was one of five individuals who addressed the school board.

LaBounty recalled a series of incidents during her time at North Fork High School (NFHS), from rats and mutilated prairie dogs placed on LGBTQ students’ property on and off school grounds.

Recent graduate, Rodriquez, told DCSD board members that his last year at NFHS was one of the hardest years of his life.

“I’m a queer, trans man,” Rodriquez said. “I came out last May and on my journey so far, your district has actively made my existence nearly impossible.”

The young graduate said he felt unsafe during his time at school, ultimately deciding to pursue an early graduation at the age of 16 due to daily harassment.

Rodriquez said that the district’s support was “radio silence” once he came out, adding that he felt like “a problem to be solved.”

“DCSD is just not a safe space for queer youth,” Rodriquez said. He said he felt “dehumanized” by his peers, noting that many would aim derogatory slurs at him each day at school.

Van Vleet told school board members that a neighbor’s rainbow-painted mailbox was recently “smashed, run over and allegedly shot” during Pride month celebrations.

He alleged a freshman peer was responsible for the incident.

Van Vleet recalled joining the football team his senior year to fit in, but felt pushback from his teammates who felt uncomfortable having him in the same locker room.

Delta Pride founder, Saenz, also addressed the school board, recalling his challenging youth as an LGBTQ person. He called for the board to establish new policies that would educate and support LBGTQ youth in the district.

“Ask yourselves, are you ready to bury these kids?

Are you ready to bury the ones who reached out for you every day [for help]?” Saenz asked board members. “Are you ready to explain to their parents that their cry wasn’t worthy of new policies? These policies that would help educate others and keep their children safe from not only other student bullies, but the adults as well? Because honestly, adults are their biggest bullies.” DCSD Superintendent Caryn Gibson is looking into the students’ claims, many of which the board had never heard before, she told the DCI.

“We truly care deeply about all of our students and want them to have a good experience at school … mentally, socially, physically, academically, you know, we really care about the whole child,” said Gibson. DC Cares awards three scholarship recipients who are graduating seniors for their “unique” and community-oriented responses. The Learning Council is Women & Girls of Color Fund Grantee

Women & Girls of Color Fund grantee The Learning Council meets with the Southern Ute Powwow Committee to build relations and work together to bring the Powwow back to Delta County. 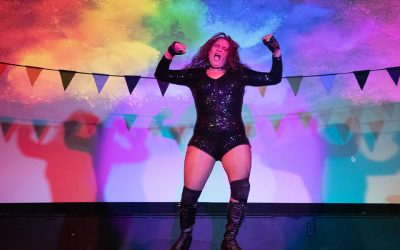